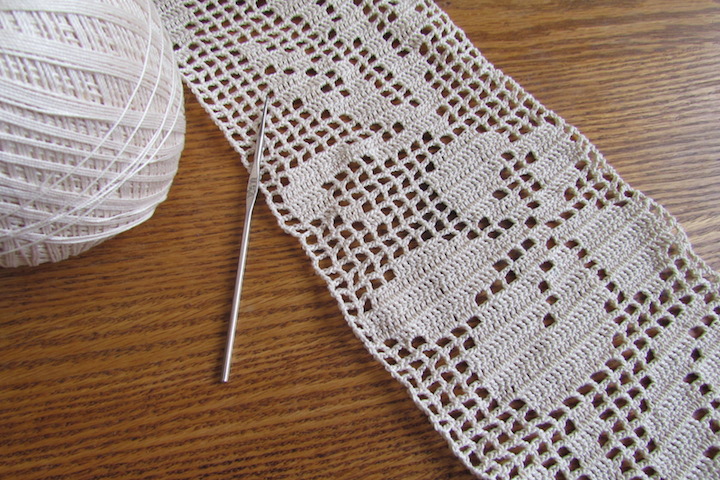 My first love in the world of textiles and creating them was crochet.
When I was a little girl, my parents went to the neighbor’s often to sit and visit, taking my little sister and I with them.  This neighbor couple were much older than my parents, and were like surrogate grandparents to us girls.

Mrs. Schyberg was a prolific crocheter.  She almost always had a hook and yarn in her hand, and from as early as I can remember, I was fascinated by the beautiful items she created with this ages old technique.  Expecially the beautiful lace; doilies, edgings, and bedspreads.  I fell in love with those lace items, and many other things she made, and wanted to make them myself.

I wanted to learn to crochet, very badly.  There was just one problem.  Mrs. Schyberg was left handed, I right, which meant that she didn’t feel she could teach me.
Imagine my amazement when, for my sixth birthday, I was given a skein of yarn, [think 1970’s sparkly, kind of a fuschia crossed with dusty pink], and a crochet hook.  My mother had learned that another neighbor of ours also crocheted, and she was right handed, so part of my gift was a trip to this lady’s house for some lessons.

From the very first, I was hooked! [pun intended =)]  I spent many happy hours looping yarn around the hook and pulling loops through others loops.  And plenty of time untangling knot after knot when I didn’t put my projects away and the yarn came to be what I considered hopelessly tangled.  I don’t know what happened to that skein of pink yarn, but I do still have that first crochet hook.

The most memorable ‘first’ project I made was a scarf in my school colors.  It was supposed to be a straight scarf in white, with blue stripes at the ends.  About six inches into the project, I noticed that the sides were narrower than at the beginning.  I had accidentally made the width smaller, by skipping the first stitch on several rows.  After figuring out what I was doing wrong, I carefully crocheted down the body of the scarf keeping it even, and then, with a little help, I’m sure, managed to make increases at the other end so that it matched the first.

By the age of nine, I was designing and crocheting my own patterns for baby doll sweaters and matching hats.  My mom was involved with the RIF program at my school, and she would organize a bazaar once a year as a fundraiser for the program.  There were cake walks, game booths and a craft table.  I remember being out of school because I was sick, and making a trip with her to pick up some books for that year’s distribution.  During that trip I worked on some of those sweater sets for the bazaar.  I also remember being very pleased when people actually bought them!

I have dabbled in, and become very good at other crafts over the years.  Sewing was next on my list of accomplishments, both hand and machine, then quilting, knitting, weaving and spinning.  But I keep coming back to crocheting.  I love textiles, and many of the textile arts, but I will always fondly remember and return to my first love.

I’m even passing this craft on to the next generation.  I have gifted each of my girls a skein of yarn and package of crochet hooks for their fifth birthday.  Not all of them have grown to love the craft as I do, but at least they had the opportunity to find out whether they did or not.

My current personal project is a bedspread for our room.  My mother always had irises in her garden when I was growing up, so when I found this pattern online, I knew it would be a beautiful reminder of her, and make a lovely addition to our bed.

I have quite a ways to go, because this is a big project, but I’ll be working on it over the winter, a little here, and a little there.  Hopefully by next spring I will have irises gracing my bed, as well as my garden.